skip to main | skip to sidebar

The "thrash resurgence" that started at the dawn of the decade with excellent releases from such bands as Kreator, Sodom and Destruction hearkened back to the classic 80's period where not only were the German bands at the top of their game, but ALL of thrash metal was reigning supreme. Sadly, most of the American groups, including the Big Four, were a little slow on the uptake.

Slayer's 2001 album, God Hates Us All, was a step in the right direction (that direction being away from Diabolus in Musica), but they just weren't there yet. Too many modern influences remained and the rapid-fire thrashers like Warzone and Payback were too few and far between. In 2006, Slayer returned with Christ Illusion, which kicked many of the nu-metal influences and sounded like more of a true return to form. However, they still just weren't there yet.

With their newest album, World Painted Blood, Slayer returns with full force, delivering their heaviest, most chaotic album since 1994's Divine Intervention. With more speed, better riffs and solid song structures all around, World Painted Blood leaves the last 3 efforts in its wake.

Drawing heavy influence from the 2012 craze and the idea of the world coming to an end, songs such as the Grammy-nominated Hate Worldwide, the punishing Public Display of Dismemberment and, of course, the title track, Slayer is not afraid to instill fear in the hearts of its listeners and bring joy to the ears of longtime thrash fans.

World Painted Blood is not without some modern touches, however. Playing With Dolls slows the pace down a bit and allows for some much needed breathing room before the closer, Not of This God, one of the albums most brutal numbers. Thankfully, such touches are tastefully used and do not interrupt the momentum of the record.

One major drawback is the production, which tends to muddy Hanneman and King's guitars at certain points, but Lombardo's drums sound quite good and Araya's voice seems to not have aged in the past eight years.

I can easily recommend this album to any thrash fan, or any fan of energetic music in general. It is not Slayer's best work, but it very may well be their last great album.
Posted by Ryan Mullaney at 7:03 PM 4 comments:

Here's a photo of my CD collection. It's not every one that I own, though. Maybe 80%. 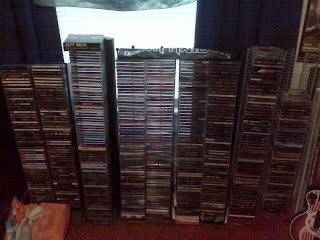 One day, I'll upload some photos of my DVD collection.
Posted by Ryan Mullaney at 11:40 AM 1 comment:

Sorry for the lack of new pointless information. Been outlining/writing a new script that I want to get finished sometime this year, and by finished, I mean something more than just a crappy first draft. It's a story I'm very eager and excited about, so I'm trying to dedicate as much free time as I can to this project. My Xbox 360 broke just in time.
Posted by Ryan Mullaney at 9:08 AM 9 comments:

To some people, I have a reputation for being...a little hard to please when it comes to film. I do indeed set my standards very high and I'm not afraid to say exactly what I think of a less than favorable script or film. However, contrary to popular belief, it is not impossible to please me.

As proof, I will now attempt to compile a short list of unproduced screenplays that I very much enjoyed. Hopefully I will expand the list in the future, but for now, here's a few scripts that come with my fabled official seal of approval. These aren't really my 'top whatever', they are simply among my top screenplays. Enjoy.

SOURCE CODE - Can't say enough about this one. Stellar writing all around. I'm a huge sucker for stories where a character is forced into a situation and is pushed far past his/her limits in order to escape and/or survive. Source Code is that kind of story. Similar to Deja Vu, only much better. I won't give anything away. Just read it. It's not flawless by any means, but then again, what is? I guess you can say it's "flawed-less".

THE F-WORD - A common story told uncommonly well, The F-Word sounds about as generic as saying it's a movie where people do stuff. Yes, it's about people doing stuff, but those people, the characters, are so likable and interesting, you can't help but go along for the ride. Another "flawed-less" script that has some minor quibbles which are fairly easy to overlook. I can practically count my favorite rom-coms just by giving the peace sign, so needless to say, one would have to be pretty awesome for me to enjoy it, and I enjoyed The F-Word.

ARMORED - The movie isn't out yet, so this still counts. Written by former DoneDealer and present TwoAdverbian James Simpson, Armored is the script every spec writer needs to read when contemplating the phrase "high concept". Armored's story centers around the concept of an armored car guard trapped inside the car with millions of dollars and his partners stuck on the outside. Thing is, the guards on the outside want the money that's inside. Great premise. Armored is also the script everyone should read to see very effective use of "white space" and how is can be used to craft a quick and intense read.

GALAHAD - Ryan Condal's Galahad comes with my highest recommendation. Characterization, dialogue...everything is top-tier. It's also one of the first scripts that made me realize how important depth of story is. Depth of story is my way of saying that the story seems as though it's part of a larger world, and not just a screenplay or a movie. While reading it, I sensed that everything that was happening was part of a larger paradigm, a larger world, and that really helped suck me in. The characters, the locations, everything seemed to have some kind of history. More-so than most scripts I've read. Definitely check this one out.

BURIED - The whole story takes place inside a coffin. Okay, I'm sold. When I read that, I just had to read the script to find out just how the hell the author made that work...or if it didn't work. Typically, when I read an awesome logline where the premise sounds as though it could never work, it doesn't. Buried is an exception - it actually works, for the most part. Buried has it's fair share of flaws, but most are easily overlooked since they can very easily be fixed in a simple rewrite. It will be quite interesting to see how this plays out if/when it every hits theaters. All I know is that I'll be there.

More to come at a later date. If you would like to read any of the scripts mentioned above, drop me an e-mail.
Posted by Ryan Mullaney at 8:20 AM 1 comment:

Welcome to...whatever the hell this place is supposed to be. I suppose I will post a bunch of random and sometimes useful information about film, screenwriting and possibly even music...but I really have no game plan at all. It's all going to be pretty spur of the moment - basically, whatever I think is useful and/or cool that I would like to share with you.

The title of this site, Goliaths Disarm Their Davids, is taken from a song by the Swedish metal band In Flames, off their 1997 EP Black Ash Inheritance. Why did I choose that as the title? I have absolutely no idea. Again, spur of the moment. It's literally just the first phrase that came to mind, so I went with it.

After about 2 minutes dicking around in Microsoft Paint (yes, I said MS Paint), I came out with the banner image you see displayed at the top. Who better to decorate the image than Don Vito himself? There is no greater Goliath, except maybe his son Michael, and they both certainly disarmed their Davids.

But In Flames kinda sucks now.

So anyway, I hope to add new stuff here every day or two, or whenever I can. You will probably see some film reviews (in great detail or in 4 words or less), script reviews, random nuggets of screenwriting information that I picked up along the way, or a bunch of random shit off YouTube. So check hourly. I know you will. Don't even try to lie. We all love YouTube.
Posted by Ryan Mullaney at 8:50 AM No comments: